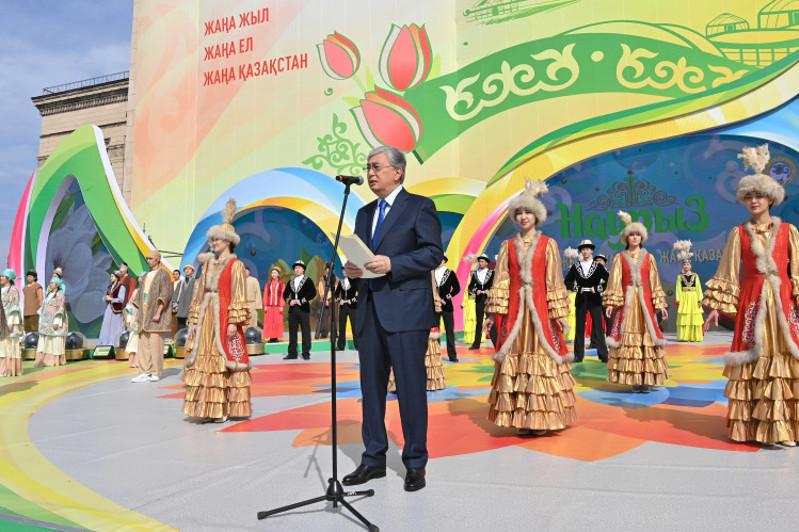 The Head of State, who is in Almaty on a working visit, took part in a festive event on Astana Square. Kassym-Jomart Tokayev congratulated all the people of Kazakhstan on the holiday of Nauryz, which, according to him, exemplifies since ancient times values such as prosperity and renewal.

“The sacred Nauryz is a holiday of prosperity, unity, charity and mutual respect. I came here to celebrate this great holiday together with you. Almaty is the cradle of our Independence. It was Almaty that started the revival of the Nauryz celebrations. This city is the spiritual, cultural and business center of Kazakhstan. Representatives of the intelligentsia and the fields of arts, education, science, and business communities are concentrated in Almaty,” President Tokayev said.

The President emphasized that during the recent “January events”, the Almaty’s residents withstood serious trials.

“At the critical hour, the residents set an example of true patriotism. Thanks to unity and solidarity, we saved our country. I have given specific instructions to the relevant authorities on the reconstruction of the city. The development of Almaty and the improvement of the quality of life of its inhabitants is a priority for me. There is a substantial work ahead of us; we are now facing great tasks. I am sure that the residents of Almaty will take part in their implementation,” the Head of State said.

President Tokayev noted that Kazakhstan has entered a new stage of development. He emphasized that the large-scale reforms presented in his latest Address to the Nation are aimed at significant modernization of Kazakhstan.

The President wished that the holiday would mark the beginning of new transformations and that Kazakhstan will remain a strong and united state.

Following his statement, the Head of State watched a festive concert with the audience.