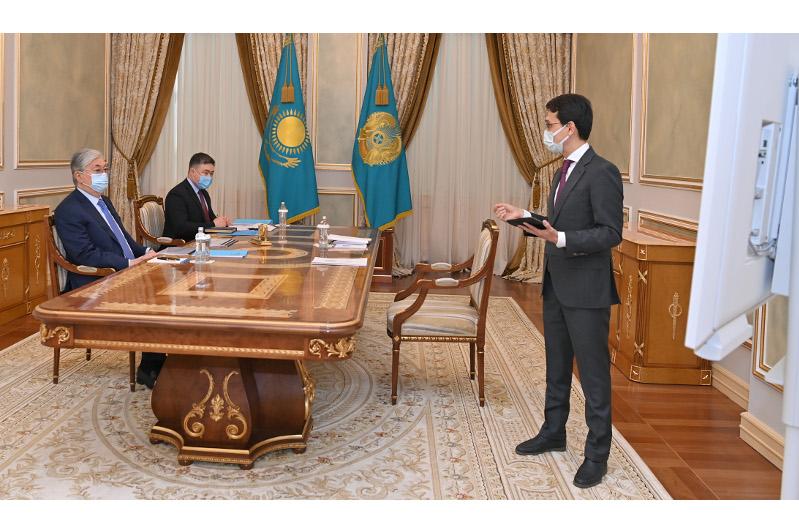 Head of State Kassym-Jomart Tokayev had a meeting with Digital Development, Innovation and Aerospace Industry Bagdat Mussin during which the former heard a report on the activity of the Ministry on the implementation of the tasks announced by the President aimed at increasing the quality of the work of the telecommunications sector.

During the meeting, the Head of State was reported that as part of the implementation of human-oriented services 18 most popular documents, including through introduction to popular external platforms with the obligatory observation of the measures to protect personal data, were made digital. In addition, Mussin briefed the President on the implementation of the instruction regarding the elimination of digital inequality and enhancement of control measures relating to Internet quality and coverage.

In 2021 the quality of the internet was improved in 628 settlements, and in 2020 140 more settlements will be covered. The President was reported on the successful testing of 5G technology in Nur-Sultan, Almaty, and Shymkent cities by mobile operators. In 2022, 5G commercial service is to be launched in the cities of republican significance. The Minister also presented the plans for further development of the telecommunications market.

In particular, the work to demonopolize the Group of Companies Kazakhtelecom will be carried out as well as a number of legislative initiatives aimed at improving the competitive environment will be adopted. Mussin reported on a number of strategic projects within the digitalization of Kazakhstan in the fields of energy, subsoil use, health, social protection, and monitoring of water and land resources with the use of remote sensing satellites. Special attention was paid to the development of the IT sector.

The report was made on the activity of the Astana Hub technopark, including the relocation of foreign IT companies in Kazakhstan. The President gave the instruction to develop concrete measures to support the domestic IT sector, as well as support foreign IT companies achieved success in the international market.

During the meeting, the minister also proposed to create a platform to digitize domestic IT companies with the attraction of experienced experts drawing on the resources of the National Information Technology JSC.