Growth rate of economy of Kazakhstan accelerates to 4.4% 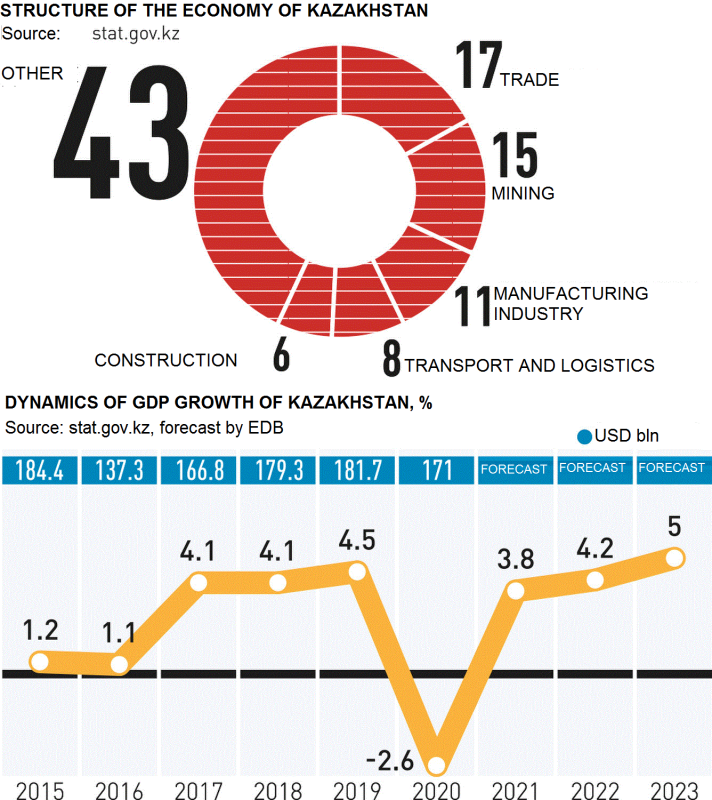 The Minister of National Economy of Kazakhstan, Alibek Kuantirov, spoke at a government meeting about the results of socio-economic development in January-March 2022.

In January-March of this year, the growth rate of Kazakhstan's economy accelerated to 4.4%. During the reporting period, according to the main trends, there is an acceleration of growth in the real sector, a gradual increase in exports, and stable dynamics in the service sector. Growth in the real sector amounted to 5.9%, business activity in the service sector increased to 2.8%.

According to the head of the Ministry of National Economy, among the industries showing positive growth are transport and warehousing, construction, trade, water supply, manufacturing, information and communications, mining, and agriculture.

The growth rate of investments in fixed assets amounted to 1.5%. The growth dynamics of investments in fixed assets, excluding the mining industry, amounted to 0.6%. Investments increased in construction by 2.2 times, education by 2.2 times, public administration, social security by 78.5%. In the regional context, the best indicators are noted in Shymkent, as well as in the Akmola and the Pavlodar regions.

The manufacturing industry maintains a steady growth trend. In January-March of the current year, the volume of production increased by 6.5%. Positive growth was noted in all regions, with the largest increase observed in Almaty, as well as in the North Kazakhstan and Atyrau regions.

As for the commissioning of housing: compared to January-February, the growth dynamics improved by 7.7 percentage points and for the first time since the beginning of the year entered the positive zone.

A total of 2.9 million sq. m of housing, which is higher than in January March of the previous year by 0.4%. Positive dynamics was recorded in 15 regions. The highest rates are in the Turkestan, the West Kazakhstan and the East Kazakhstan regions.

By Tamila Yazykova for Zakon (Kazakhstan).