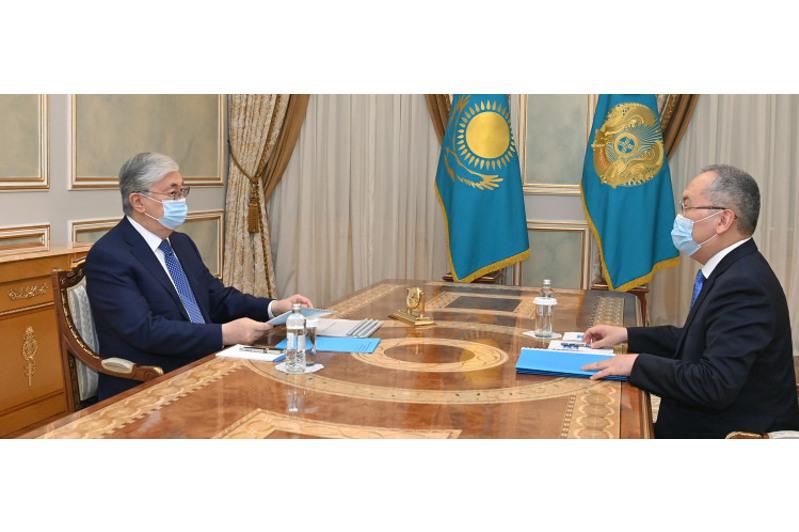 President of Kazakhstan Kassym-Jomart Tokayev had a meeting with Chairman of the Agency for Financial Monitoring Zhanat Elimanov, where he was reported on the outcomes of the Agency's activity in the 1st quarter of this year.

During the meeting, it was reported that 550 criminal cases half of which on serious and especially serious crimes were opened. 14 pretrial investigations on the establishment of organized crime groups were launched. Damages to the State were estimated at KZT62bn. According to Zhanat Elimanov, as part of the 2021-23 comprehensive plant systemic measures t reduce the level of grey economy are taken. 34 criminal cases were initiated in the customs area. The total cost of non-declared goods exceeded KZT10bn.

The President was informed about the investigations of the cases of stealing KZT20.5bn allocated to modernize the oil refineries. As the Agency's Chairman reported special attenction is paid to resolve social issues in the society. As part of the Tarif project, the work to detect unjustified incraseses in utility tariffs and break up monopolies. There is an ongoing investigation of the officials of the Energy Ministry, Governor's Office, and e-trade platforms regarding the speculation when marketing liquified gas. As part of the instructions of the Head of State, the work to combat an illegal withdrawal of funds out of Kazakhstan.

According to the President, the law enforcement and supervisory authorities should promptly respond to requests of entrepreneurs and not undermine their rights. Tokayev believes that SMEs need special support from the State and the role of the Agency is of special importance. The common task of the law enforcement and supervisory bodies is to facilitate the creation of a favorable entrepreneurial atmosphere in the country in order to ensure the sustainable development of the economy.

Recent news
Commodities
Exchange Rates
Kazakhstan and United States increase trade with each other by third
"This is one of the worst indicators in the country" - President on inflation in Astana
Astana Airport nets KZT 5.3bn in 2022
Partner news