President receives the Minister of Foreign Affairs and Trade of Hungary 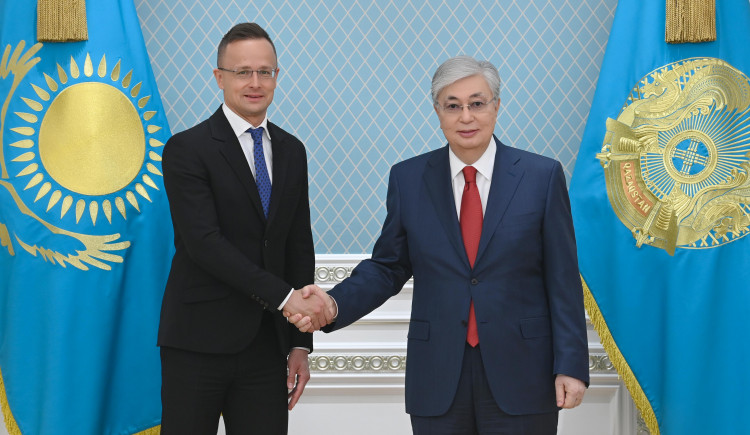 Kassym-Jomart Tokayev received Hungarian Minister of Foreign Affairs and Trade Péter Szijjártó, who arrived in Kazakhstan as part of the working tour to Central Asian states.

During the meeting, they discussed the prospects for the development of the Kazakh-Hungarian strategic partnership in the political, trade, economic, investment, cultural and humanitarian spheres.

Welcoming the Hungarian Foreign Minister, Kassym-Jomart Tokayev congratulated Fidesz party led by Prime Minister Viktor Orban on the recent victory in the parliamentary elections. The President stressed that he pays great attention to the development of cooperation with Budapest, highlighting significant opportunities in the economic dimension.

President Tokayev informed Minister Szijjártó about the implementation of large-scale political and economic reforms, the building of a New Kazakhstan, and the preparations for a referendum on amendments to the Constitution.

In turn, Peter Szijjártó thanked the President for the congratulations addressed to the leadership of his country. According to the minister, the victory of the ruling Hungarian party is important from the point of view of further implementation of Hungary’s sovereign and independent foreign policy.

Hungarian Foreign Ministry declared his country’s commitment to further strengthening the strategic partnership with Kazakhstan. Peter Szijjártó recalled the invitation to the President of Kazakhstan from the Hungarian leadership to pay a visit to Budapest.

In order to give a additional impetus to the partnership between the two countries, Kassym-Jomart Tokayev stressed his readiness to pay a reciprocal to Hungary at Prime Minister Viktor Orban’s invitation.

During the conversation, President Tokayev and Minister Szijjártó also exchanged views on pressing issues of the international and regional agenda.