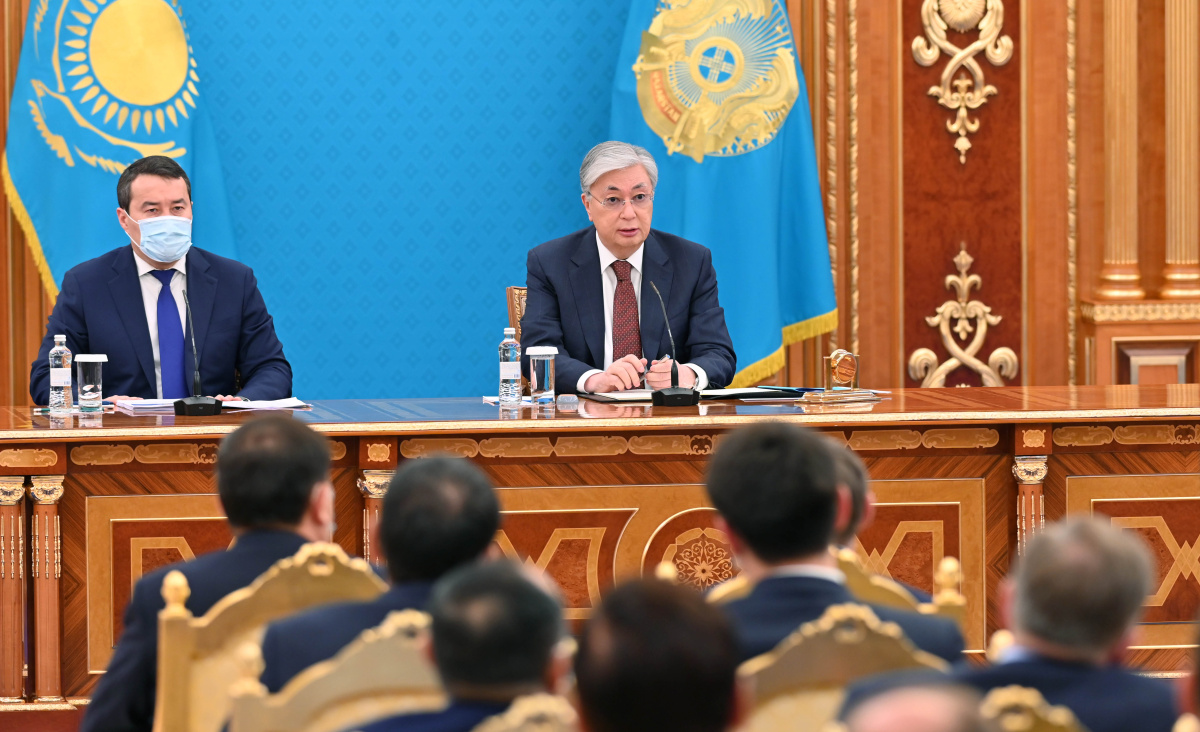 The next meeting of the President of Kazakhstan with representatives of domestic business took place in Akorda.

Opening the meeting, the Head of State noted that holding meetings to discuss issues of concern to the business community is becoming a good tradition. He added that since the last meeting in January, much has changed both within the country and abroad.

According to Kassym-Jomart Tokayev, the future of the country directly depends on a strong economy, our entrepreneurs should put the interests of the state higher.

“In general, the reports of state bodies are insufficient to ensure effective work. I consider it important to receive your assessment of what is happening in the country and the world. For my part, I would like to reiterate that as Head of State I will continue the policy of creating a transparent economy with fair rules of the game for everyone. We will not allow any redistribution of bread places and positions,” the President said.

The head of state criticized shortcomings in the work of law enforcement agencies, pointing out the inadmissibility of the previous methods of working with business.

“I openly declare that the principle “they cut down the forest - the chips fly” is unacceptable here. If such facts are revealed, special verification activities will be carried out for each case, and a qualified assessment will be given. In 2019, in my Address, I said that illegal obstruction of business should be considered a crime against the interests of the state. This is the work of the Prosecutor General's Office. It is necessary to fight against swindlers, I emphasize - namely swindlers, swindlers. But we must not allow the medicine to be worse than the disease,” Kassym-Jomart Tokayev emphasized.

The President declared the inadmissibility of corruption manifestations in the work of state bodies.

“It is no secret that regional authorities, heads of territorial law enforcement units have grown together with businessmen and, under the guise of supporting business, have contributed to their not always legal activities. As they say, distributed flows. All this created a fair characterization of Kazakhstani business as corrupt, shadowy, based on administrative resources and revolving around tenders, budgetary flows. The state must definitely and resolutely put a systemic barrier to such crimes. This is a big task. By the way, it is precisely this characteristic of domestic business that greatly harms the reputation of our state as a whole. In other words, we should not have any so-called roofs and raiding in our country. If a business is ready to work honestly, if it is creative, attractive in a modern way, you need to support it, to help him integrate into the new model of the national economy. We must strictly maintain a balance between the interests of business and the state,” the leader of Kazakhstan is convinced.

To solve these problems, the Head of State outlined a number of concrete steps.

First of all, according to Kassym-Jomart Tokayev, it is necessary to take systemic measures to reduce the repressive nature of the activities of regulatory authorities.

“Over the past five months, prosecutors have protected the rights of about 100,000 entrepreneurs, which is almost the same number as in the whole of 2021. These facts mean that the investigating authorities are persistently drawing business into the orbit of criminal prosecution. The Prosecutor General's Office needs to ensure the strictest control over preventing the facts of illegal conduct of control and supervisory and especially investigative actions against business entities,” the President instructed.

Along with this, the Head of State pointed out the scale of the practice of recognizing entrepreneurs as suspects, while in reality these are just property disputes. Kassym-Jomart Tokayev demanded that law enforcement agencies focus their efforts primarily on the disclosure of fraud, money laundering, illegal cashing, and the construction of financial pyramids.

“Of course, criminal cases born in the fantasies of law enforcement officers must be terminated by the Prosecutor General's Office as a matter of urgency. And from those who initiated such dubious cases, demand is needed. It is important to identify measures to increase the responsibility of the leaders of law enforcement agencies, whose employees discredit the government's policy of creating favorable conditions for business. I ask the Prosecutor General's Office, together with the Supreme Court and the Government, to prepare a package of specific amendments to the legislation. Administration to take this issue under control,” the President instructed.

In his speech, the Head of State touched upon the problems related to the state audit system. According to him, the results of state audit inspections in relation to government agencies-customers often become the basis for criminal prosecution of entrepreneurs-suppliers. He added that the system is built in such a way that it is impossible for entrepreneurs to either appeal the results of the state audit or avoid unreasonable criminal prosecution.

Kassym-Jomart Tokayev pointed out the need to introduce a mechanism that would not allow starting a criminal case until all possibilities of appealing against the results of the state audit in a civil procedure have been exhausted. He instructed the Prosecutor General's Office, together with the National Chamber of Entrepreneurs and the Business Ombudsman, to urgently develop mechanisms for delimiting the areas of criminal and civil liability when deciding whether to initiate an investigation.

Another urgent task the Head of State called building a more effective system for identifying pressure factors on business.

“The system of checks and balances plus public control is the formula for success in this reform. Each revealed fact of raiding or unreasonable pressure from law enforcement agencies should be under the control of the Prosecutor General. Things like this need to be completed. There can be no question of any corporate solidarity here,” the President warned.

Kassym-Jomart Tokayev focused on the priority of ensuring open and fair justice.

“Without improving the principles of selecting judges, all efforts in this direction will by default be ineffective. More than 2,000 judges currently work in the judiciary. Since the beginning of the year, about 50 legal practitioners from outside the judiciary who came from other areas have become judges. There is progress, but it is not enough. It is necessary to seriously accelerate,” the head of state said.

Another priority the President considers is to ensure the principle of justice.

“The need for a decisive reform of the judicial system is ripe. This need is well perceived by the judges themselves. I believe the reform will achieve its final results. We hear these calls from our foreign investors, our entrepreneurs and fellow citizens. Therefore, in the near future I will announce specific large-scale measures in this direction,” Kassym-Jomart Tokayev said.

In addition to steps to strengthen business protection mechanisms, the Head of State also considers it important to create an attractive investment climate. In his opinion, in the conditions of global turbulence and uncertainty, the strengthening of external and internal challenges, the role of the state is increasing.

“To build a strong and sustainable market economy, systematic work is needed to identify and eliminate factors of unequal competition. The risks of its occurrence lie in inefficient procedures for providing state support measures, their selectivity. This applies to tax incentives, allocation of land plots, public procurement and administrative regulation in general,” the President said.

Kassym-Jomart Tokayev criticized the effectiveness of the system and procedure for obtaining entrepreneurs' access to land plots and instructed the Government to take this issue under special control. According to him, the effective implementation of the project will make it possible to promptly introduce an automated mechanism for submitting and considering an application for obtaining land. He instructed to launch this system before the end of this year.

In his speech, the President also dwelled on the prospects for cooperation between Kazakh business and the Russian Federation.

“You need to understand that Russia continues to be our strategic partner. Recently in Moscow I had a meeting with President Vladimir Putin. We discussed in detail a number of issues, including unresolved ones, to build up our trade, economic and industrial cooperation. It is necessary to get out of the current crisis without losses, while maintaining established ties and chains,” Kassym-Jomart Tokayev emphasized.

In his speech, the Head of State spoke about the fair reproaches of entrepreneurs regarding the constant changes and unpredictability of state policies. Therefore, he instructed to involve the business community in the development of the New Economic Policy.

“I expect a doctrinal document from the Government and the Presidential Administration, which includes the main components of all economic policies: macro, tax, budget, monetary and so on. This work should be carried out with the constructive participation of business, because only in this way can we develop really necessary and effective reforms,” Kassym-Jomart Tokayev believes.

In addition, the Head of State touched upon the issues of tax policy and administration, where a certain imbalance is now observed. The government, together with the business community, was instructed to develop a long-term Tax Policy Concept.

Addressing entrepreneurs, the President noted that the formation of an attractive business climate includes not only changing laws and providing state subsidies. The decisive role here should be played by the effective implementation of all decisions and procedures adopted at the regional and local levels.

Summing up, Kassym-Jomart Tokayev instructed the akims of all regions to take into account all the comments made during the meeting and work together on current tasks that require urgent solutions. He added that the work of akims will be assessed in terms of the attractiveness of the business climate in certain areas.

“We will continue such meetings. They will be of a business nature,” the Head of State concluded.