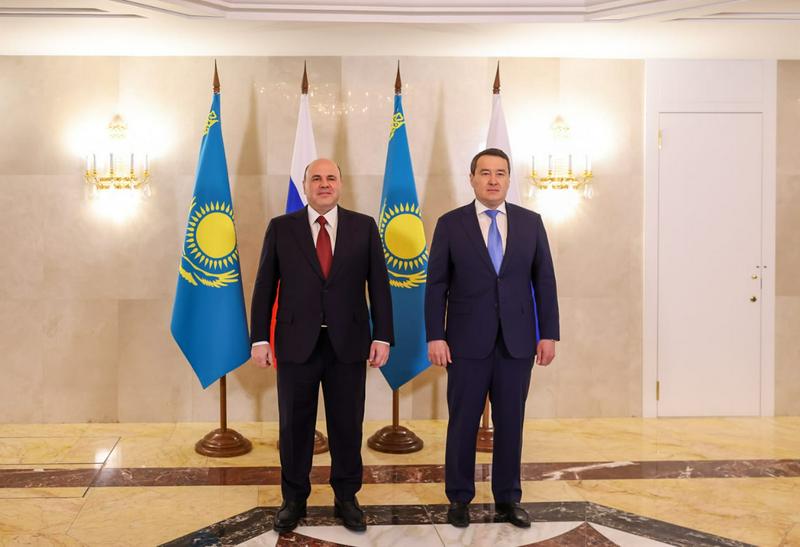 During the meeting, Smailov noted that this year all of the main events are held on the background of the 30th anniversary of diplomatic relations between Kazakhstan and Russia.

«The important guidelines for a steady development of strategic cooperation were outlines during the recent meeting of the Presidents of our countries as part of the jubilee meeting of the Heads of State of the CSTO,» he said. The Kazakh PM went on to note that the Kazakh Government focuses on deepening and strengthening mutually beneficial cooperation with Russia in all areas.

«We have the task of further enhancing trade and investment. Russia is the main trade and economic partner of Kazakhstan, with mutual trade turnover increasing by a third and reaching the record level of $24bn last year. This year, the positive trend is maintained with the trade turnover hitting $7.2bn,» said Smailov.

The Head of the Kazakh Cabinet of Ministers pointed out the systemic work conducted to develop multifaceted economic ties between the countries.

«In this regard, it seems important to timely implement the comprehensive program of economic cooperation between the countries for 2021-2025. A great role is placed on the Kazakhstan-Russia Intergovernmental COmmission,» he said. Smailov noted that in Kazahstan, 13 significant joint projects in the industrial sphere have been realized.

«I'm sure that the high pace of Kazakh-Russian strategic partnership will be further continued in all areas,» said the Kazakh PM.

«As a priority task we consider the expansion of trade and economic cooperation with Kazakhstan as well,» said Mishustin. The Chairman of the Russian Government noted that following the first quarter of this year the mutual trade turnover rose by 12.5% compared to the same period of 2021 and stood at around $5bn 800mln.

«There are conditions to launch new strategic joint projects in industry, mechanical engineering, transport, energy, and digital economy,» he said. As part of the meeting, the Heads of Government are to discuss current issues of bilateral trade and economic cooperation, including in energy, transport infrastructure, education, science, culture, and other spheres.