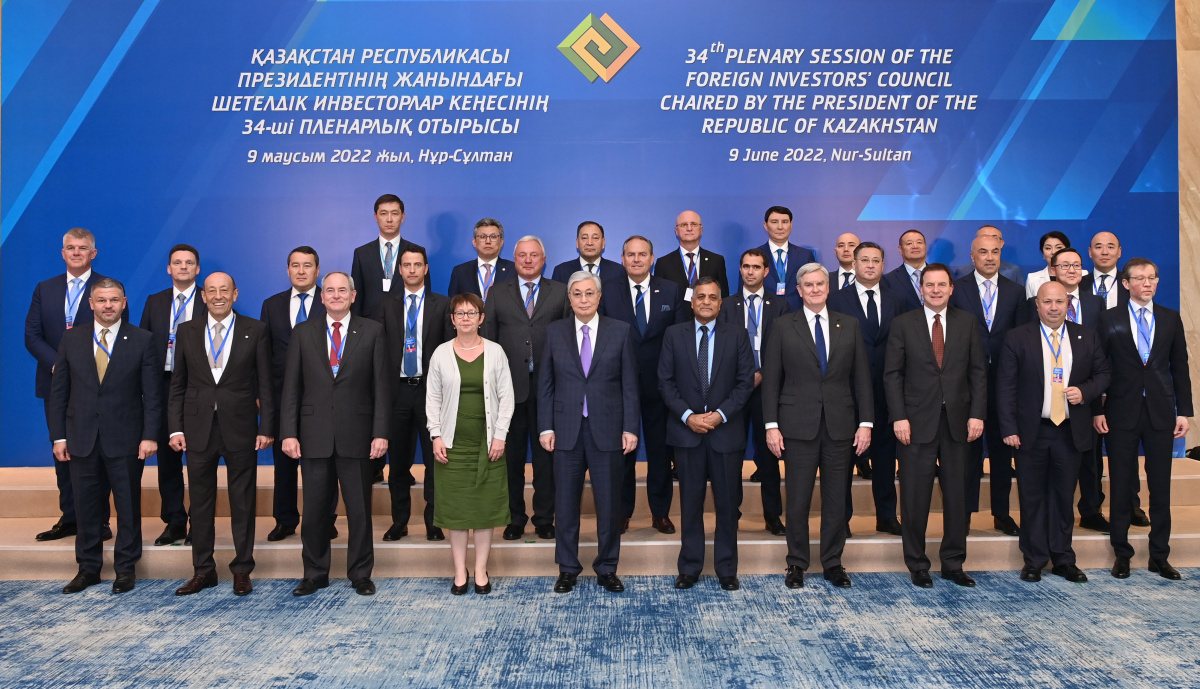 The 34th plenary session of the Foreign Investors’ Council was held today under the chairmanship of Kassym-Jomart Tokayev. The event was attended by heads of major multinational companies, heads of government agencies and representatives of international organisations.

The agenda of the meeting included the development of decarbonisation of the economy and introduction of low-carbon technologies.

Addressing the participants, the Head of State noted that today's meeting is taking place against the backdrop of an extremely tense international situation.

“Disruption of global logistics chains, trade wars, unprecedented inflationary pressure – all these are today’s reality. In such conditions, the state and business need to quickly adapt to the new rules of the game. This is the only way we can remain competitive,” the President stated.

Kassym-Jomart Tokayev informed about the ongoing large-scale democratic reforms, and the main goals and objectives of the national referendum. In his conviction, the ongoing political reforms should go hand in hand with comprehensive economic transformations.

“This approach will allow us to break out of the middle-income trap and move to the next level of development. Therefore, we are implementing a new economic course of the country aimed at building genuinely free and competitive market economy. In this regard, we also pay special attention to the systematic improvement of the investment climate,” the Head of State said.

The President emphasized the relevance of decarbonisation of the economy and the introduction of low-carbon technologies. In particular, he noted the adoption of urgent systemic measures to address issues related to climate change, the risks of declining wheat yields and the availability of fresh water resources.

President Tokayev noted that 80% of all greenhouse gas emissions in Kazakhstan are associated with the production of energy from fossil fuels, which is the main factor that has a negative impact on the country's climate. In this regard, modernisation of the energy industry is of crucial importance, according to him.

The leader of Kazakhstan stressed that further improvement of the investment climate and enhancement of investors’ rights protection system are the strategic goals of our country.

“Last year, foreign partners invested around $24 billion in our economy, which was 38% higher comparing to the previous year. Remarkably, the non-primary sector of the economy already accounts for over 60% of total foreign investment inflows. We greatly appreciate these investments and shall do everything to fulfill all our obligations to foreign partners,” the Head of State assured.

Kassym-Jomart Tokayev also declared readiness to create all the institutional conditions for establishing direct collaboration with foreign companies, including through the relocation of foreign enterprises to Kazakhstan or establishment of joint ventures.

“We are focused on developing innovations and raising levels of human capital. I believe that here the Foreign Investors' Council shall play its leading role, particularly in terms of finding mutually beneficial solutions and exchanging experience in relevant areas of cooperation. The Government in cooperation with the Council shall analyze and develop effective solutions to address these issues,” he instructed.

The President added that systematic work on improving the investment climate will be accompanied by large-scale reforms. They are aimed at developing fair competition, rooting out corruption, effective public administration, improving the quality of human capital and reforming the judicial system.

The Head of State also focused on the efforts to achieve carbon neutrality by 2060. He noted the draft Strategy for Achieving Carbon Neutrality by 2060, which covers large-scale economic, technological and social changes and must be adopted by the end of this year.

The President recalled the intention of the European Union to reduce greenhouse gas emissions by 55% by 2030 and to achieve carbon neutrality by 2050. At the same time, he drew attention to the fact that Kazakh exporters will have to pay a carbon border tax to the EU budget starting from 2026, which may affect the competitiveness of domestic products.

In this context, Kassym-Jomart Tokayev elaborated on the actions taken to reduce the carbon footprint of the country's economy and to prevent economic losses. In particular, he reported on the work done by the Government to bring the national emissions trading system closer to the European one.

“It is necessary to accelerate revision of the methodology for calculating specific factor for greenhouse gas emissions (benchmarks) towards tightening the requirements. The calculation approach should be similar to the European one - based on the top 10 enterprises in the industry. We have to take into account not only primary, but also secondary types of production, as well as expand the coverage of economic sectors similar to the European Union Emissions Trading System. I ask members of the Council to provide methodological and practical assistance,” he said.

The Head of State pointed out the necessity of step-by-step transition to a paid distribution of quotas for export-oriented sectors of the economy. In his opinion, domestic cap-and-trade system should be based on reliable data on the measurement and verification of greenhouse gas emissions.

“However, in reality we see a completely different picture. Authorities for validation and verification of greenhouse gas emissions do not visit the sites of plant operators, certifying the submitted reports remotely. Thus, they can simultaneously verify about 20 reports from different regions of the country. This raises serious doubts about the reliability of such reports. Therefore, I instruct the Government to take effective measures to enhance the responsibility and competence of the authorities for the validation and verification of greenhouse gas emissions,” the President said.

In addition, Kassym-Jomart Tokayev discussed the adoption of a new Environmental Code, aimed at stimulating the stage-by-stage preparatory work of enterprises for a major energy transition. The document gives enterprises the opportunity to modernise their production facilities with complete exemption from environmental payments. At the same time, he reminded of the obligation of large industrial enterprises to install automated emission monitoring systems by January 1, 2023 and instructed the Government to ensure timely and proper fulfilment of this requirement.

Another priority task according to the President is the work on planting greenery and creating new forest areas.

On my instruction, two billion trees will be planted throughout the country by 2025. Last year 138 million trees were planted, and 280 million – this year. However, these rates are not enough, we need to speed up. I hope that Council members will support this initiative and make a significant contribution to this work," the Head of State said.

The President underscored the key role of the gas industry in reducing the use of coal, noting the increased demand for domestic gas consumption.

“I would like to emphasize that meeting domestic demand for gas has absolute priority over gas exports. I ask the Government in cooperation with the shareholders of Tengiz field to address the issue of redirecting two billion cubic meters of gas from export to the domestic market,” Kassym-Jomart Tokayev instructed.

The Head of State also noted in his speech the growing potential for the development of renewable and alternative energy. The goal is to bring the share of renewable energy in the country's energy balance to at least 15% by 2030.

He also noted the importance of nuclear power. According to the President, in the context of instability of renewable energy and limited gas generation, the peaceful use of nuclear energy is the only source of continuous basic generation.

In conclusion, the leader of Kazakhstan urged members of the Council to intensify actions to implement green projects, mobilize ESG investments and achieve sustainable development goals.