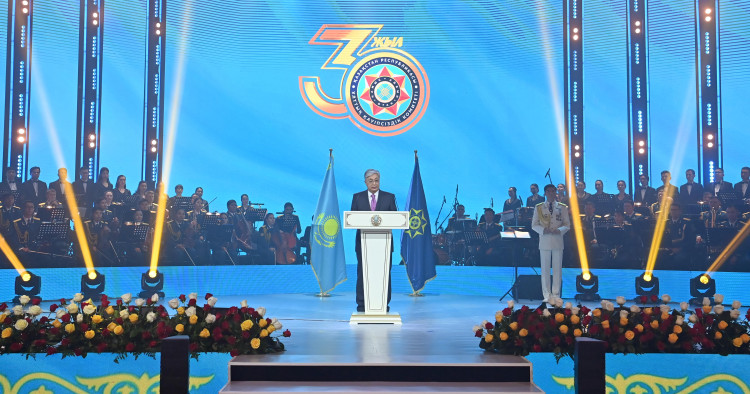 Addressing a solemn meeting dated to 30 years since the establishment of the National Security Committee, Kazakh President Kassym-Jomart Tokayev congratulated the veterans, officers, and NSC officials and noted their contribution to the strengthening of Kazakhstan's statehood, Kazinform cites the Akorda press service.

«National security system is the unshakable backbone of our statehood, our independent development. Thanks to the citizens selflessly serving the motherland, our country follows the path of development and prosperity. Internal and external threats are responded to timely. The foundations of the State and constitutional order are under strong protection. The values of our independence have been challenged many times. You have worked tirelessly for peace and harmony,» said the Kazakh President during the event.

The Head of State reminded about the contribution of the national security bodies to the combat against terrorism and radical religious extremism in the 2000s.

Since the start of the year, 42 people involved in extremism and terrorism promotion have been detained thanks to the effective work of the Committee's officials. Two terrorist acts were prevented.

A number of dangerous criminal groups have been neutralized by the national security bodies and police. 22 members of armed bands were taken into custody.

In a space of six months, 15 drug labs, and 23 international and 40 regional drug channels were eliminated. As part of the fight against international drug trafficking together with foreign partners 14 international special operations have been carried out.

The Kazakh President believes that the growing geopolitical tensions, unprecedented sanctions standoff, and spreading hybrid conflicts result in fundamentally new challenges to national security. In his opinion, rapid globalization and all-out technological revolution lead to more transparent and open borders. There is a greater external influence on the information and social and cultural space of Kazakhstan as interdependence among states increases.

Tokayev noted that in May the decree on the reformation of the NSC aimed at the fundamental transformation of its activity and increase the quality of the national security system management was signed.

At the end of the event, the President awarded a number of NSC officials with State prizes.