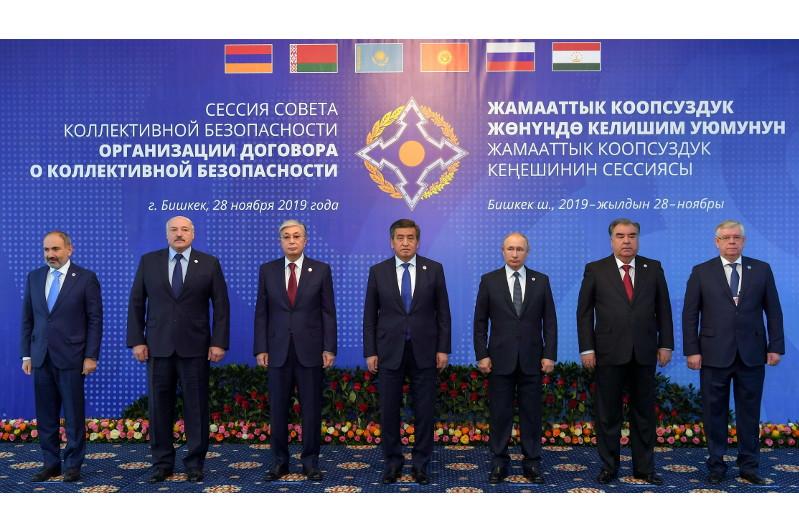 President of Kazakhstan Kassym-Jomart Tokayev, President of Belarus Aleksandr Lukashenko, President of Kyrgyzstan Sooronbay Jeenbekov, President of Russia Vladimir Putin, President of Tajikistan Emomali Rahmon, Prime Minister of Armenia Nikol Pashinyan and Acting Secretary General of the CSTO Valery Semerikov had a closed-door meeting, after which the negotiations continued in an enlarged format.

The heads of state exchanged views on international and regional security, summed up the results of implementation of priority areas of the Organization’s activity in 2019 and set the plans for the oncoming period. Kassym-Jomart Tokayev informed his colleagues of Kazakhstan’s position on pressing issues of interaction of the member countries.

«We intend to develop political cooperation within the CSTO, strengthen its military-force potential and counter the modern challenges and threats,» the Kazakh Leader highlighted. The Head of State pointed out the importance of enhancing political dialogue in international security. He emphasized the CSTO’s responsibility for ensuring security in the territory located in the heart of Eurasia. In his opinion, the Organization could link Europe and Asia as a common Eurasian platform of security.

In order to achieve this goal, Kassym-Jomart Tokayev proposed to discuss a number of tasks. In particular, he stressed the necessity to work on the CSTO’s international reputation.

«We do not confront anyone, on the contrary, we are ready for a mutually beneficial dialogue. This principle should be promoted further,» the Kazakh leader said. In this context, the Head of State reminded of the importance of the earlier adopted Open Statement of the CSTO Foreign Ministers to the NATO on strengthening mutual trust and cooperation development. Kassym-Jomart Tokayev noted the importance of further development of the CSTO Partner and Observer institution, the decision on which was adopted last year in the capital of Kazakhstan.

In his words, the first results of these institutions’ activity are evident today.

The President also raised the issue of countering terrorism in the CSTO space, in particular, in Afghanistan.

«The authorities control today only a little over half of the country's territory, where 65% of the population lives. The rest of Afghanistan is controlled by terrorist organizations. Having such a source of threats from the south, the Collective Security Treaty Organization (CSTO) is urgently required maintain the forces and means to combat international terrorism and other threats.

He informed the Summit participants of the results of Jusan humanitarian operation when Kazakhstan evacuated its 595 nationals including more than 400 children. Kassym-Jomart Tokayev drew the participants’ attention to the issue of fight with illegal trafficking in drugs and strengthening cooperation in information and cyber-security. In conclusion, the President thanked Sooronbay Jeenbekov for Kyrgyzstan’s successful chairmanship in the CSTO and congratulated Russian colleagues on assuming the presidency in the Organization.

At the end of the Summit, the CSTO heads of state adopted a political statement on improvement of the international interaction and cooperation for the purpose of strengthening the global and regional security. The documents signed in Bishkek are aimed at further development of interaction within the CSTO and prove the Organization’s openness and its positive attitude towards to the expansion of cooperation with other countries and international structures.

17 documents including the Statement on improving international interaction and cooperation with a view to strengthening global and regional security and 14 decisions of the Council of the Collective Security were signed today in Bishkek following the regular session of the CSTO CSC.

The following documents were signed:

1. On Action Plan on celebration of the 75th anniversary of the Victory in the Great Patriotic War 1941-1945;

2. On amendments to regulatory-legal acts of the Collective Security Treaty Organization;

3. On amendments to the Regulations on the CSTO Collective Security Council;

4. On amendments to the Rules of Procedure of the CSTO bodies;

5. On the Collective Action Plan of the CSTO member states on implementation of the United Nations 2019-2021 Global Counter-Terrorism Strategy;

6. On the List of additional measures aimed at reducing tension in the Tajik-Afghan Border Region;

7. On basic organization in development of cooperation and integration relations between enterprises and organizations of defense industry (military-industrial) complexes of the CSTO member states;

8. On the Regulations on the procedure of organization and conducting joint research and development within the CSTO;

9. On amendments to the Regulations on the operation of permanent action of the CSTO member-states to counteract crimes in IT (PROXY operation);

10. On amendments to the Regulations on the CSTO Council of Ministers of Defense;

14. On chairmanship in the Organization, time and venue of holding the regular session of the CSTO Collective Security Council.