President was briefed on Zhambyl rgn development in 2020 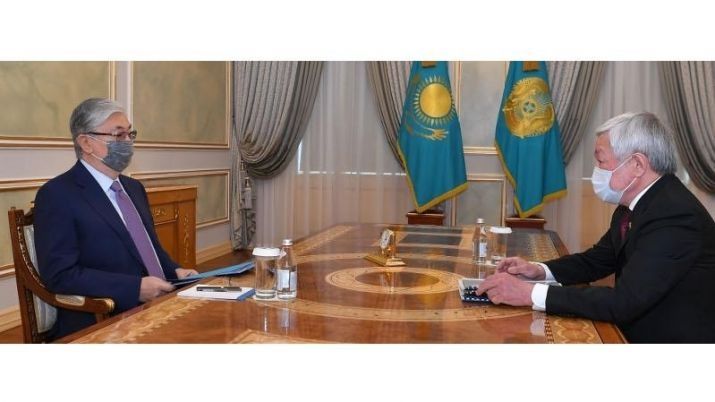 Kassym-Jomart Tokayev was briefed on the region’s development in 2020, the follow-up of the tasks specified in the state-of the Nation Address.

Berdibek Saparbayev stated that the economy growth in Zhambyl region for the reporting period stands at 102.2%, investments in fixed assets reached KZT 344.1 billion.

As for the social sphere, the President was informed that during the pandemic, 524 000 residents of the region had received social assistance the size of KZT 44.6 billion. By the Independence Day and New Year holidays, 8 000 people were given additional one-time assistance in the amount of KZT 203 million.

Tokayev was separately briefed on the situation in Kordai district. According to the governor, the situation in the district is stable. In 2020, 392 projects were implemented in the housing and road construction, education, medicine, culture and sports for a total of KZT 35.1 billion. Large-scale work was accomplished to access to gas 22 settlements, provide drinking water and build roads the length of 391 km. 5 residential buildings with 360 apartments were built.

Saparbayev also accounted on preparedness for the next wave of coronavirus: 4.5 thousand infectious and 468 intensive care beds have been made ready in the region. A two-month supply of medicines was formed. If necessary, up to 7 000 health professionals will be additionally involved.

In Gvardeysk village of Kordai district, construction continues of the plant for the domestic immune drugs production on the basis of the Research Institute of Biological Safety Problems.

The governor briefed the President on plans to clear problems of emergency and three-shift schools in Zhambyl region, to bring the number of people involved in mass sports to 35%.

Ending the meeting, Tokayev instructed to keep the epidemiological situation under control, to step up work on attracting investments and implementing the Employment Roadmap.

Recent news
Commodities
Exchange Rates
Share of spending on food among Russians jumps to a 10-year high
Construction of incinerators throughout Russia suspends in the air
Russia’s public debt up to 17.8% of GDP in 2020
Partner news